This review examines two recent offerings in the 3 megapixel, 3X optical-zoom class of compact digital cameras - currently the most popular class of digital camera. Prices on these cameras have dropped into the mainstream ($300-$400). The 3 megapixel resolution is sufficient for high quality 8X10 inch prints, and the 3X optical zoom provides moderate wide to telephoto coverage for most photographic needs. The two cameras examined in this review, the Nikon Coolpix 3100 and the Sony Cybershot DSC-P72, are designed as point and shoot cameras aimed primarily at novice photographers.

First a few words about my "critical eye" review methodology. I will not be giving detailed descriptions of operating controls and menu selections, as readers can obtain that information by looking at camera user manuals or reading articles by other reviewers. I will also not be describing every camera specification and feature, as that information is available in the manufacturer's literature or their web sites. Instead, the focus of my reviews will be on information that cannot be easily obtained without actually using the camera. Specifically, I will be focusing on where the camera either falls short or exceeds promised capabilities. All evaluations are based on shooting in the highest quality, maximum resolution picture mode. 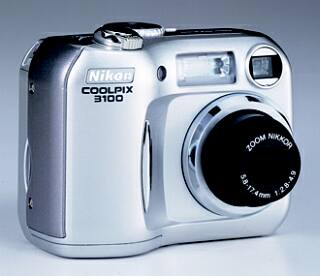 What was better than expected

Picture quality from the Nikon was excellent. Colors were very accurate, pictures were sharp and contrasty, and lens flare minimal - even when shooting into the sun.

The Nikon has excellent close-up focusing capabilities, focusing as close as 1.6 inches in macro mode (in contrast the Sony's closest focus was 4 inches).

The Nikon has a bright, easy-to-read LCD monitor, that displays images smoothly even when camera is panned in dim light. The same monitor also provided rapid reviewing, zooming and panning stored images.

The Nikon is almost subcompact in size, yet comfortable to hold. The bulge around the battery compartment provides a comfortable handhold for the camera. The camera weighs only 7.6 oz with battery, flash card, and strap (in contrast, the similarly outfitted Sony P72 weighs 9.1 oz).

What was worse than expected

Focusing was exceptionally slow with the Nikon - taking around 2 seconds with the LCD display on and 4 seconds with the LCD off (the camera focuses continually when the LCD is on, speeding up focus). Focus speed varied with the light level, with focus fastest in bright sunlight where it dropped to around 1 second, and slowest in dim interiors where it took many seconds. The absence of a built-in focusing lamp in the Nikon aggravated the focusing problem, and the camera was unable to achieve focus in very low light situations.

There is also significant shutter lag. After focus is achieved, there is still a noticeable delay between when the shutter is depressed and the picture is actually taken (around 1 second). This can cause missed shots if the camera is moved too quickly after depressing the shutter button. Some time is also needed for saving each picture. With all of this, I found I was unable to shoot more than 3-4 separate shots in a 10 second period, even in bright light.

Flash recycling time was also very slow, with delays of around 10 seconds between successive flash shots. This, coupled with the slow focusing, made "rapid" indoor shooting very difficult.

There are no focus indicators or crosshairs in the viewfinder or LCD screen. The camera's focusing area appears weighted towards the center part of the viewfinder and nearer objects. The lack of a well-defined focus area made macro shooting difficult to predict when shooting in the vicinity of many nearby objects. In more than a few cases focus was often not on what was intended. Unlike the Sony, this camera does not support manual presetting of focusing distances.

Light sensitivity is not adjustable on the Nikon. The camera automatically varies sensitivity between 50 and 800 IS0 depending on the light level. Unfortunately there is no indicator of the selected ISO or shutter speed, so one cannot predict whether the shots will be noisy or blurred. Users do have the option, however, of selecting a "Sport" program mode, which locks shutter speeds to a higher level (1/60 sec or faster).

The Nikon does not record sound, only silent low-resolution video.

Battery life is on the short side. I found I had to switch batteries at least once each day of extensive shooting. The camera is rated for 80 minutes of typical operation, though\ actual life depends on the kind of shooting being done. I found I was able to get up to 240 outdoor shots using 1600 mA NiMH batteries. Users should keep a spare set of batteries with them at all times, especially since the battery indicator only displays three charge levels: full, partially-discharged, and empty (in contrast, the Sony displays four levels in its battery indicator). On the plus side both of these cameras use readily available, low cost AA NiMH batteries. Unlike the Sony, the Nikon does not come with a battery charger or rechargeable batteries. The Nikon's battery life was about half that of the Sony.

The power switch on the Nikon is a toggle surrounding the shutter button. This is the same location many cameras have their zoom controls, and I found I was repeatedly shutting off the camera when I intended to zoom. The switch lever also sticks out slightly, so it can potentially snag on objects and accidentally turn on. Since the lens cover opens and the lens extends when it turns on, this could cause damage to the camera.

The picture review mode can only be entered from the shooting mode. There is no separate control for going directly to the picture review mode. Unfortunately, this causes the lens to be fully exposed and extended while you are reviewing pictures, increasing the chance of dirt or damage to the optics.

The Nikon has a continuous shooting mode, where the shutter continues to fire when the button is held down. The number of shots that can be taken in a ten second period increases to 5 in this mode, presumable because auto white balancing is done only once and the lens is already prefocused for subsequent shots. The Sony has a two shot burst mode, but no continuous shooting mode.

Nikon has "Best Shot Selector" feature that selects the sharpest of a sequence of shots for actual storage. I found this effective for getting a sharper picture under slow shutter speed situations.

The Nikon also provides a wide range of preprogrammed camera modes, including ones for sports action and for difficult lighting situations (e.g., fireworks displays).

The Nikon comes with Version 6 of Nikon's Nikon View software. The software includes a simple picture editor called Nikon Editor, which can supposedly automatically remove red-eye. I found the "automatic" red-eye removal operation did not work on my red-eye pictures; however, the alternate "Click-on-Eyes" red-eye operation did.

A feature I found less than useful on the Nikon were the "framing assists". When these are invoked an outline appears on the LCD monitor to guide framing of pictures (for positioning people, horizons, etc.). Nikon brochures suggest these frame outlines will take care of situations where the dominant object is not centered, eliminating the need for prefocusing on off-center subjects. In practice I could not detect any shift in the focus points when templates were used. Using a template with a person outline positioned to the left of the view screen resulted in the same focus when the subject person was actually positioned in the middle or on the right, completely outside the template's outline. Given that activating the template feature requires of complex menus, I think most users will find the use of templates too confusing to be of value.

On to Page 2 of Review