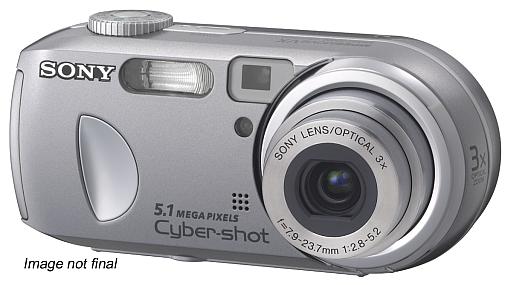 The new line-up for 2004 will now start with a $200 4 megapixel fixed lens camera called the P41 and then includes the new 4 megapixel P73 which offers a 3X optical zoom lens and uses 2 AA batteries, the 5 megapixel P93 which has a 3X optical zoom and also operates on 2 AA batteries at a price of $350 and the new P100, which has a 5 megapixel CCD and a 3X optical zoom. The P100 has a very small compact size by using Sony's thin InfoLithium Battery. For the first time in a P-Series compact camera Sony is offering a Carl Zeiss lens on the P100 camera. The P100 will sell at a price of $400. All 4 of the new P-Series cameras will ship in May.

Here is the Sony Press Release for futher details as well as product photos.

So that the cameras' settings can be quickly determined behind-the-scenes, Sony incorporated its new Real Imaging Processor™ circuit on the new Cyber-shot DSC-P100, -P93, -P73 and -P41 cameras. Measured in fast start-up and shot-to-shot times rather than megahertz, key benefits of the processor translate into making the Cyber-shot cameras always ready to great pictures. All cameras will be available this May.

"Throughout the coming years, we'll see a greater number of people trying out a digital camera for the first time, and we're making sure that Cyber-shot cameras improve upon their film camera experience," said Greg Young, Sony Electronics' director of digital camera marketing.

Cyber-shot P100 Camera: Compact and Full Featured
Don't let its size fool you. The Cyber-shot compact P100 digital camera is a stylish, pocket-size camera with specifications typically found only on more full-sized, high-end five-megapixel cameras. At about one-inch thin, it is easy to hold and use. 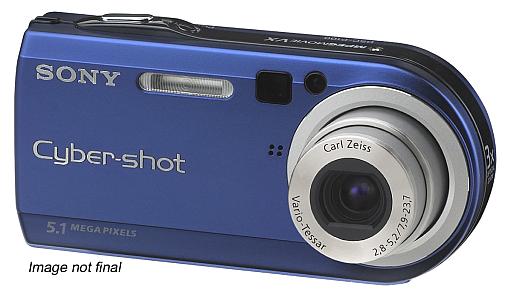 For the first time in a Cyber-shot P-series camera, Sony is offering a Carl Zeiss® Vario Tessar® 3X optical zoom lens to complement the high resolution for great picture clarity. However, the advancements of this camera lie beyond these basic specifications.

So that pictures are captured in-focus with the proper lighting exposure, the camera enlists the aid of a smart auto-focusing and exposure system-meaning that even if the subject is off-center and in a difficult lighting situation, the camera can automatically make the necessary adjustments. Additionally, six preset scene modes are available so that the user can quickly select the best setting for the shooting conditions.

For those wanting greater flexibility, the Cyber-shot P100 camera also features manual flash and exposure settings, and it accepts the VAD-PHB lens adaptor bracket allowing use of telephoto and wide angle conversion lenses. 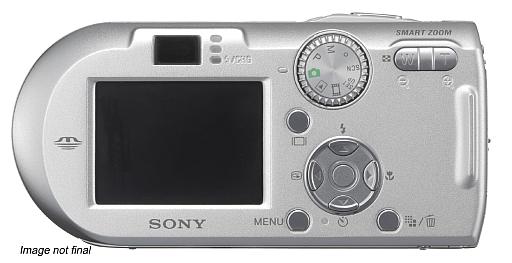 Cyber-shot Station: The Perfect Companion
Finally there's a better place to put the digital camera other than a desk or table drawer. Designed to reside next to a TV or PC, the new Cyber-shot Station™ CSS-PHA camera accessory, available in May for about $80, accommodates the Cyber-shot DSC-P100 camera for playing back slideshows on a TV, while charging the camera's batteries.

The bundled infrared remote controller intelligently commands the docked camera via the Cyber-shot station to toggle between captured videos and still pictures. And when connected to a PictBridge™ interface compatible printer such as the new Sony PictureStation® DPP-EX50 digital photo printer, printing a specific image is easy as a press of the remote controller's button.

Cyber-shot Basic P-series: The Only Basic Feature is the Price
Intelligent enough to capture great pictures, but simple enough for the first-time digital camera user, Sony's line of P-series point-and-shoot cameras help to take the guess work out of digital photography. Like their fully-featured sibling, the P100, the P41, P73 and P93 cameras offer intelligent auto-focus and auto-exposure systems.

Unlike other cameras in this category, the new P-series cameras seem to sip battery power. Thanks in large part to the Real Imaging Processor circuit, the cameras are able to take up to 400 shots between charging. 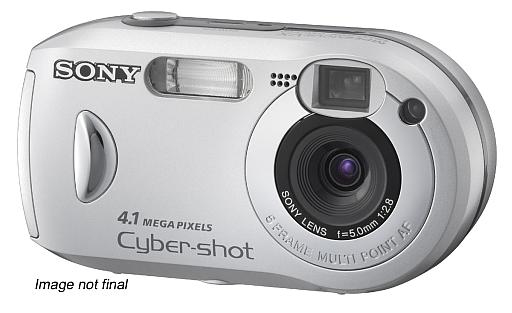 Additionally, the new processor enables features such as burst mode. The DSC-P41 and -P73 models capture 4 shots at 1.3 fps, while the DSC-P93 camera captures 9 shots at 1.2 fps. And with an optional high speed Memory Stick PRO™ media card, all three cameras can capture video clips in TV quality resolution (VGA) and motion (30fps). 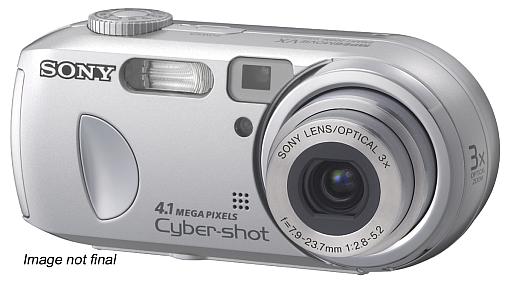 Both the P73 and P93 cameras offer manual exposure control and histogram display for greater user control in image quality. The lens' outer ring on both cameras can be removed so that the camera can accommodate various conversion lenses.

All of these cameras come bundled with a 16MB Memory Stick card. The Cyber-shot DSC-P41 will sell for about $200. Bundled with rechargeable batteries and a power charger, the DSC-P73 and DSC-P93 cameras will retail for about $300 and $350, respectively. 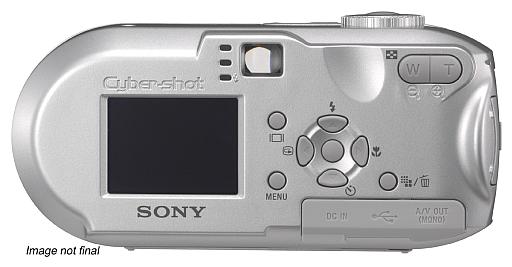